Last fall, our youngest son played football.  It wasn't his thing so he didn't sign up for this year's season.  I thought that would mean that this fall would be less busy!  How wrong was I?  At least so far.  Between church events, school happenings, cake orders, life in general, our schedule is full.

How is your fall season starting out?

Here are a few recipes I've tried in the last week or so.  None of them take much time, or at least not much brain power.  I've either been short on time or short on energy and they all turned out wonderfully.

Chocolate Mousse:
I love, love, love to watch Master Chef.  (My husband can tell you I have celebrity chef-crushes on two of the hosts.)  On a recent episode the contestants were challenged to make 3 chocolate desserts.  Mousse was one of them.  I had the ingredients on hand, and was inspired to try.  Disclaimer: the recipe I used from the cookbook "How to Cook Everything" contains raw eggs.  The recipe was easy to do and turned out well.  But, you might want to find a different version if raw eggs are not something you can or want to eat.

The stages of the recipe involve melting chocolate and butter, whipping egg whites, whipping heavy cream, delicately hand mixing the whipped ingredients with chilled chocolate.  And, the final product just has to sit in the fridge and set.  Yum.


Smitten Kitchen's Flat Roasted Chicken with Tiny Potatoes:
So good with only a handful of ingredients.  You'll be amazed at how much flavor you can get from simple chicken, potatoes, salt, pepper and olive oil.  My only difficulty was peeling the tiny potatoes.  They were flying out of my hands left and right.  It was worth the effort.  I did not have quite enough tiny potatoes so I peeled and chopped up a couple of regular ones.  There is a difference.  My 7 year old pushed the 'regular' potatoes around on his plate and refused to eat them.  Once the peeling is done, its in the oven and just let the magic happen. 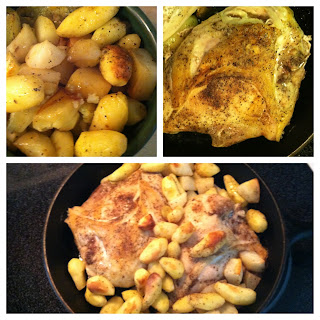 Even after snapping the last picture, I put the dish back in the oven for a few minutes.  The chicken was perfect and even more delightfully roasted, but by then we were ravenous and I didn't stop to snap another pic.

Spanikopita:
Did I spell that correctly?
My husband wanted to try this dish.  He saw it in the freezer section at the grocery store.  I said, "wait!  I've been wanting to try working with phyllo dough...let me try making it first."  He agreed and I did.  It wasn't hard, but has a few do-ahead steps.  Both the spinach and the dough have to thaw -- I used frozen chopped spinach and phyllo dough.  The process of rolling up the triangles takes a bit of time but wasn't hard.  If you've ever folded paper footballs, you have the skills needed to make this dish. 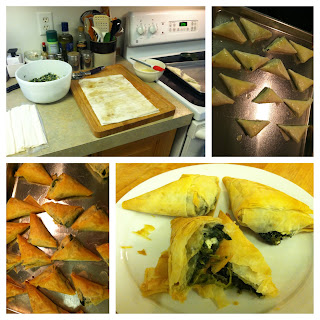 I used a recipe from allrecipes.com.  It made quite a lot.  I could have easily halved this recipe.  Now, my freezer is storing some extras for quite snack.  Its football season so easy finger foods are always good to have on hand.

Go Vols!!
Oops - a bit side tracked, there.  I'm a die-hard fan of my beloved Vols.  We're having some rough years, but I feel certain we'll bounce back.

Amanda
I recently turned 40 and am currently staying at home to raise my two sons. I quit my job in the field of social work to stay at home. I have been at home for several years, now, and have become a foodie! I love to experiment and try new recipes and I keep my DVR busy recording cooking shows.